Paying for police and fire service next year 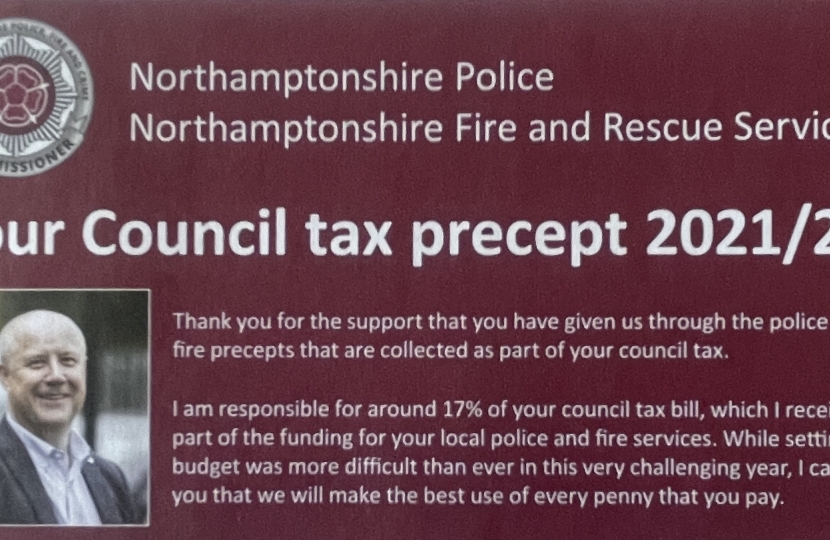 Northamptonshire Police, Fire and Crime Commissioner Stephen Mold is asking for increases in police and fire precepts to ensure both emergency services continue their progress into 2021/22.

The precepts, which together make up just 17% of residents’ council tax bills, help fund both the police and fire budgets – and more than half of 2,500 people who responded to a consultation supported the proposals to increase both precepts.

After much lobbying, the Commissioner has managed to secure an additional £2 million in funding from the Home Office to help secure the Fire and Rescue Service’s financial stability. Half of that sum will be saved as a necessary reserve.

The extra cash injection means that the tax precept will now only increase by £1.23 a year for band D households, compared to the £5 increase that was previously proposed.

“This money is a one off grant, and while it doesn’t give us the certainty for future years that we are looking to achieve, it does mean that we don’t need to slow down on our plan and that we can push ahead, without asking local taxpayers to pay more than we have to.”

The police precept meanwhile will increase by five per cent – an extra £13 a year for a band D household – but is a smaller rise than was legally allowed. It will bring in an extra £3.15m for policing in the county in the next financial year, taking the total budget to £153.5m.

Since 2017, the budget given to the police by the Commissioner has increased by 31% and there are 200 extra police officers. The precept increase will allow the recruitment of a further 130 officers over the next two years, which will make the Force the largest it has ever been.

Stephen Mold added: “I have to balance the need to keep the public safe and to ensure the police have sufficient money to do their job with the ability of the public to pay. We have made important investments that have strengthened policing in Northamptonshire over the last four years to give a better service and keep our community safe. A 5% increase will enable us to tackle the issues that the public have asked us to address and to put more police officers on the streets.”