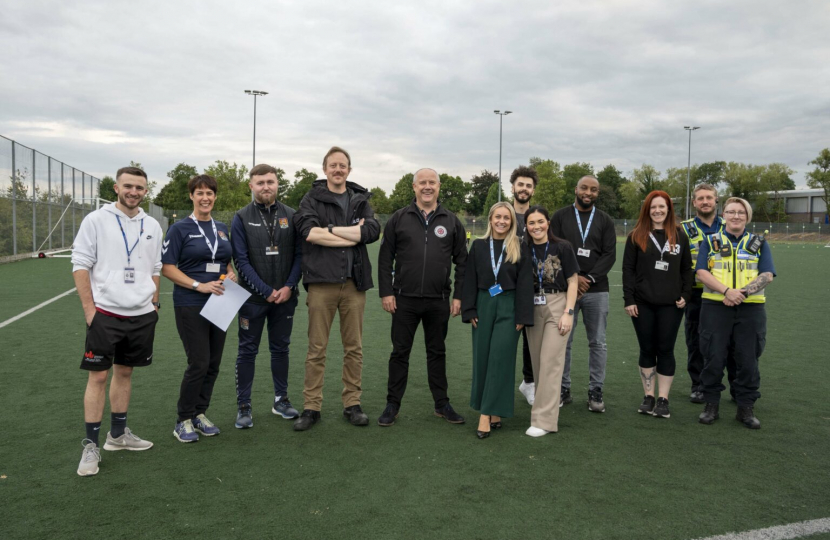 The tournament was organised as part of a Week of Action by Northamptonshire Police targeting serious violence – and saw 75 young people from Blackthorn in Northampton and Hemmingwell in Wellingborough come together for a friendly tournament at Northampton Academy.

Serious violence is a priority for the Force and the Office of the Police, Fire and Crime Commissioner (OPFCC), and the Blackthorn and Hemmingwell estates were selected for the scheme as they have higher levels of gang related activities than many other areas in Northamptonshire.

Police, Fire and Crime Commissioner Stephen Mold went along to lend his support to the tournament on September 20, and while there he was able to observe the engagement with young people – who were all aged between eight and 18 – and a number of services during downtime between matches.

These included local PCSOs, the OPFCC Youth Commission and its Adverse Childhood Experience (ACE) officers, the Community Initiative to Reduce Violence (CIRV) team, the Youth Offending Service and its Prevention and Diversion Scheme, early intervention service Aquarius and community group Off The Streets.

Young people were educated about the risks of carrying knives, while parents were also given advice on spotting the signs of gang involvement and ensuring they can leave such activity behind safely.

Police, Fire and Crime Commissioner Stephen Mold said: “It was a pleasure to head along to the football tournament and see a number of organisations working together jointly to educate young people about the tragic consequences that can occur from knife crime and gang involvement.

“As the Commissioner I will continue to ensure we work with partners to protect young people with early intervention, and it was great to see the positive effect this event had on those who attended as well as their parents.”

And Chief Inspector James Willis, who organised the tournament, said: “This was a sterling example of partnership working, and I am grateful to all the organisations and volunteers who gave up their time to assist. It was gratifying to see the children and young people engaging with the service providers and showing off their sporting prowess.”

A new environmentally friendly fleet of hybrid motorbikes will become tools to help Northamptonshire Police improve its accessibility and visibility to members of the public.